We want to say a huge THANK YOU to our Senior Designer Ollie, who has been with Bluestep for 5 years this month!


We’ve had a string of milestones lately that we can barely keep up! First we had Becca promoted to Senior Designer, then we saw Carlene promoted to Office Manager, Sarah has just reached her 1-year anniversary and now we’re celebrating Ollie reaching his 5-year milestone. High-fives all around!

And we thought what better way to celebrate 5 years than with an animation for our longest-serving animator?! Take a look below at our custom animation featuring Ollie himself (thanks Carl!).

Not only is Ollie a design guru but he’s also one of the original Bluesteppers and has seen the company grow from the small and promising start-up it was back in 2010 to the multi-million-pound enterprise that it is today.

As Ollie’s been here for 5 years we decided to keep the blog on the theme of 5. And a lot has happened since he joined, as Ollie will know, so with that in mind here are 5 career highlights about Ollie’s time at Bluestep:

1. Ollie started Bluestep as an intern in June 2012 and was offered a permanent position in September 2012.
2. His office initiation was a trip to Alton Towers! (We’re seriously jealous)
3. He joined Bluestep when they were a small team of 6 and has seen those numbers grow to nearly 30!
4. He’s worked on a variety of different projects ranging from pathology forms, campaigns, branding to animation, websites and apps.
5. Since joining Bluestep he has seen 2 office moves, plus an office expansion of our current office.

So, who is Ollie?

Ollie is one of Bluestep’s Senior Designers, lending his countless creative skillset to our client base, offering graphic design, illustration, animation, web design and much more for some major national campaigns including Choose Well, Patient Voice Panel and Referment – pretty impressive right? But he’s not just a design master, he plays an important role in keeping the cogs of the design studio running smoothly and keeping us Bluesteppers smiling!

Still not sure who Ollie is? We’ve got 5 facts about Ollie that you probably didn’t know: 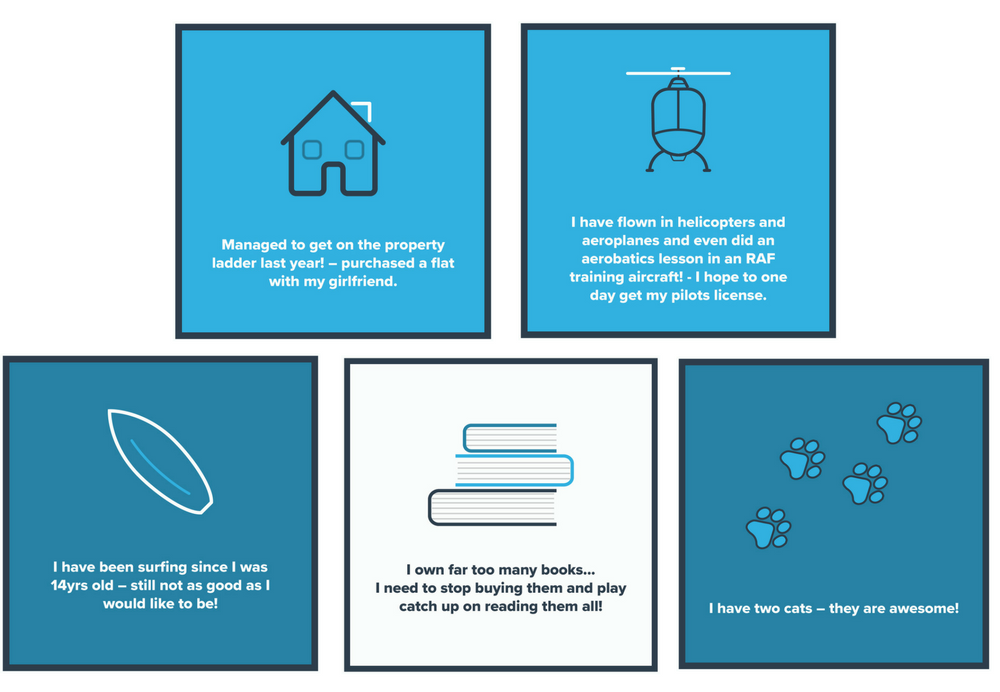 We can’t quite believe it’s been 5 years already, but we want to say a huge thank you for your years of hard work and dedication to Bluestep and hopefully even 5 more years! We don’t know what we’d do without you!

New kid on the block, Carl, brings a whole host of ideas and talent to the Bluestep design studio, and we’re already excited to see what kind of cool, quirky animations come jumping from his Mac.

Audio engineer, animator, musician, mushroom hater and website obsessive. Carl has many strings to his bow and we’re extremely privileged to take on another young, fun and super-talented Bluestepper!

Bulking up the design team’s endless talents as our animation designer, Carl’s creativity and tech- savvy knack mean he’ll be able to apply himself to a range of our existing projects and help take our clients to the next level.

Carl was first attracted to Bluestep because of its genuine desire to raise awareness of topics that matter in a unique and creative way, with a team that’s constantly bubbling with ideas!

A graduate from Southampton Solent, Carl made many international friends during his studies, which means he is now a regular jet-setter around Europe, exploring and touching base with old faces.  Adventurous Carl is rarely seen without his headphones, and aside from being a talented creative, he also performs in two bands and shoots music videos. His relationship with the music industry takes up a lot of his spare time and most weekends he can be found gigging or behind the camera.