Google is renowned for keeping its users on their toes and they’re at it once again with a big shift to their mobile-first index!

When we’re not making pets decide their owner’s fate or supporting the FA cup final, we like to get stuck into the latest SEO tips and tricks on how to cheat Google. Google recently announced that users are now searching on their mobiles more than any other device and will soon be pointing their algorithms at your mobile first rather than your desktop.

We’re experts when it comes to SEO and web-design (just take a look at some of the sites we’ve made) and we follow closely in the footsteps of the internet giant.

It’s not just about your website looking the prettiest and loading the quickest when it comes to getting that golden #1 hotspot on Google, but it’s about how it works. Google is already in the experimental phase of making their main algorithm mobile-first and so many websites just aren’t cutting it when it comes to mobile!

You might have (painfully) come across them before, but many sites have mobile versions of their current ones that normally feature a lot less content than the desktop version, and this can affect your rankings in a major way. We all know Google loves words.

The new mobile-first index will now favour your mobile site so it’s important your website is fully responsive to all devices, of any shape and size, be it a mobile, tablet or desktop. They want to be able to present its users with the best content on the internet, and if your website is holding you back then it’s time to step into 2017!

BrightEdge’s latest report shows that 57% of all online traffic is now coming from mobiles and tablets – meaning that nearly 6/10 consumers are now searching on a mobile device. 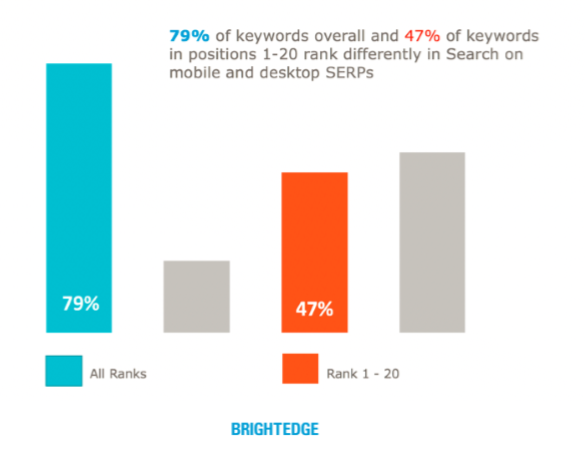 Their press release sheds more light on the research; when searching the same query on the same search engine, it generated different ranks on mobile and desktop 79% of the time, which could suggest their mobile-first index is already in place.

If you’re on the hunt for a new, flashy website that will help you get those ever important CTR’s and ROI’s then get in touch with us today to see what we can whizz up.